This recipe is for Bacon Wrapped Grilled Shrimp and it’s great for tailgating.

First you’ll need 2lbs of jumbo raw shrimp. I buy them froze, deveined, still with the shell. Thaw the shrimp in cool water and remove the shell leaving the tail still attached. Use a sharp knife to carefully butterfly each shrimp (this is easy with deveined shrimp because the cut has been started for you). Store the shrimp in a covered container in the refrigerator until ready to assemble.

The next step is to precook 2lbs of thin-cut bacon. I do this because the shrimp would overcook before the bacon browns. Arrange the bacon strips on a foil lined cooking sheet at 415⁰ for ten minutes in the oven. Precooking the bacon leaves it flexible enough to wrap around the shrimp. Be sure to drain the bacon on paper towels once it comes out of the oven.

While the bacon is cooling, mix the Bacon Wrapped Grilled Shrimp stuffing:

Combine this mixture and set aside or store in the refrigerator until ready to use.

Reduce for 15 minutes or until the glaze thickens. Store the glaze in a jar until ready to use.

To assemble the shrimp, fill each one with a teaspoon of the cream cheese mixture and wrap a slice of bacon around the outside. They’re ready to cook immediately or store in the refrigerator overnight.

If I’m taking them to a tailgate, I’ll secure the bacon with a toothpick, place in an airtight container, and store in the refrigerator or a cooler on ice until ready to grill.

This recipe can be cooked on any type grill set up for indirect cooking. I’m firing up my PK 360 with hot coals spread out to each side which creates an indirect zone in the middle.

Also I’m using a couple of my chicken racks (wire cooling racks) to make transporting/maneuvering the shrimp easy on the grill. Spray the racks with a little vegetable cooking spray and arrange the shrimp on the racks. Place each one on the indirect zone of the grill and close the lid for 8 minutes.

It doesn’t take shrimp long to cook; just look for the color to change. Brush the Sweet & Spicy glaze over each shrimp and cook an additional 2 minutes.

Once the shrimp are fully cooked and the bacon is nice and brown, carefully remove the racks from the grill. Arrange the Bacon Wrapped Shrimp on a platter and serve with the remaining glaze for dipping. I guarantee you these won’t last long and this recipe is always at hit! 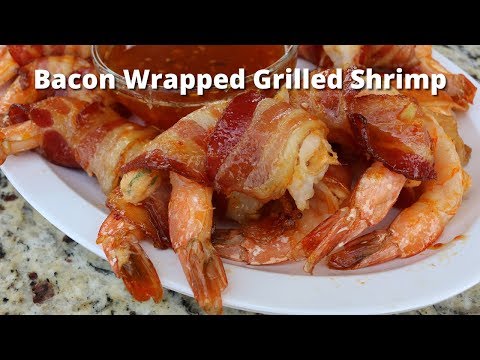 Grilled Shrimp Wrapped in Bacon and Stuffed with Crab and Cream Cheese For more barbecue and grilling recipes visit: http://howtobbqright.com/ This re...