Added 3 years ago by Serg
93 Views

Learn how to make a Horse's Neck with a Kick worthy of being called a James Bond cocktail using Cognac, Bitters, Lemon Peel and Ginger Beer. The series, Cocktails and Pussy Galore, shows you how to drink like 007 using the Ian Fleming books (not the movies) as the source, which takes you beyond the typical James Bond Martini.

James Bond had several Brandy & Ginger Ales throughout the books, On Her Majesty's Secret Service and You Only Live Twice. Also, the antagonist of the story, Octopussy, was drinking his day away with Brandy & Ginger Ales when Bond met with him. Despite his characters having a fondness for this drink in the later books, Fleming added an editorial aside that a Brandy & Ginger Ale was a "drunkard's drink." Perhaps he didn't mean it to come off as judgmental as it sounds and that the implication was that, sure, it's a drink for drunkards, but what's wrong with being a drunkard?

The Horse's Neck is a classic cocktail and improved version of a Brandy & Ginger Ale highball. The Lemon Peel and Bitters makes a difference and it turns a good drink into a great one. Be sure to use a high quality Ginger Beer (or Ginger Ale). Since it's such a big part of the cocktail, you don't want to skimp on the soda. Besides as Bond says, the cheapest way to improve a drink is to use a quality mixer. When it's the cheapest part of the drink, why use a cheap soda?

This is an old drink that dates back to the 1800's. It's origins were as a virgin drink (lemon peel and ginger ale), but later, booze was added to it and it's full name was a Horse's Neck with a Kick. The kick was Brandy and Bitters (and more recently, it's become to mean whiskey instead of Brandy). This is a late afternoon sipper. Like most highballs, it cries out to be drank in the shade on a hot day. Next time, you're cooling your heels on the porch, mix up a Horse's Neck to cool down your throat. Cheers!

whole Lemon Peel
Build in a Collins Glass. Peel whole Lemon. Add ice and Lemon Peel to the glass with the end hanging over the rim. Add Brandy, Bitters and Ginger Ale. 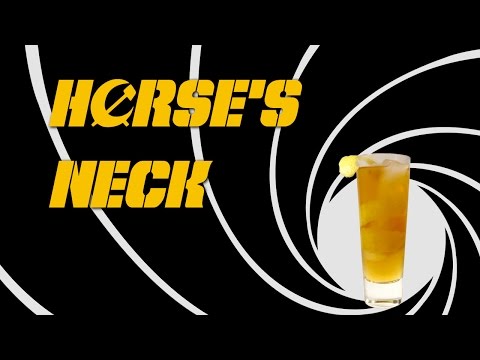 Learn how to make a Horse's Neck with a Kick worthy of being called a James Bond cocktail using Cognac, Bitters, Lemon Peel and Ginger Beer. The serie...