Added 3 years ago by Serg
85 Views
Like these Cocktail Recipes !!! Check out the official app http://apple.co/1I00csa

I'm going to show you how to make one of the best, most versatile, and most delicious ingredients for cocktails, ginger syrup. It's not nearly as hard as you think. So we're going to take a nice, big piece of ginger. I'm not even going to use all of it, just half of it and cut it up in sort of quarter size pieces. Just what's easier to process.

Even though I'm going to show you how to make ginger syrup, you can make simple syrups from almost any flavor, any fruit, vegetable, herb. All you're really doing is taking your normal simple syrup, sugar and water, and adding whatever flavor you want. Sometimes, you can just heat up the simple syrup and add the ingredient, like mint simple syrup. You just steep the mint. Sometimes, something denser like ginger, we're going to have to simmer and boil it first to really get that really spicy ginger flavor in there. Making fresh syrups like this and flavored syrups is one of the best ways to add variety to your cocktails. If you want to make, say, a ginger daiquiri or something, you just replace the ginger syrup with simple syrup and that's it.

So now we have sliced ginger. We're going to add this to the food processor. I didn't peel this ginger. You can; it gives it a little cleaner feeling, but I don't mind the robustness of the peel. I also think that peeling is a tedious step. It's optional either way. It will make a good product. Now we just coarsely chop this. Great sound. I've got to get the last pieces. There we go. Mm, delicious.

All right. So I've got my measuring cup and the pot that I'm going to put this over the stove with. So I like to do about one part ginger to one and a half parts water. Let's get all of that in there, and, again, it's always a good idea to have your rag on hand because any time we're in the kitchen or making stuff with cocktails, a mess is probable.

All right. Let's see. What have we got? Okay. So that's about one and a half cups of ginger, so one and a half parts of that is going to be two and a quarter cups. Math is also a skill you might want to have when making cocktails. Simple math, not like pre-calc or anything, which is when I just went off the rails. I was good up until pre-calc, and then never again.

So you kind of eyeball this, I mean, about two and a quarter cups of water. Now what we're going to do is we're going to simmer this. We're going to bring it to a boil and simmer it for about 30 minutes so that the liquid reduces and really soaks up that ginger flavor. So now that I've simmered my ginger for about 30 minutes or so and reduced it, I'm going to strain out all of that ginger. We've got the strainer here, and it's always good to have a trash can handy so that you can do this.

Now we're just going to make regular simple syrup with this. Pretend that this is your water, in this case, your ginger water, and we're going to do one part ginger to one part sugar. That's a cup, so I'm going to add one cup of sugar. And again, you can eyeball this. That's just about two cups, a little under, but I think it'll be plenty sweet. And since you just took it off the stove, it should be good and hot. Make sure you use glass, of course, with this, but It will dissolve right into the sugar, and you will be done.

That is how you make ginger syrup. 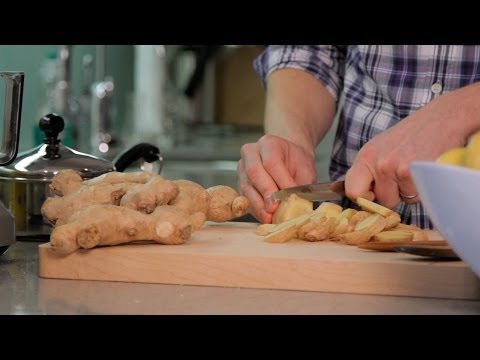 Like these Cocktail Recipes !!! Check out the official app http://apple.co/1I00csa Watch more How to Make Cocktails videos: http://www.howcast.com/vid...